KORE’s 100% owned Long Valley Project is a large epithermal gold deposit with extensive drilling of the shallow oxides. The recent preliminary economic assessment demonstrates Long Valley has the potential to be a simple, high recovery heap leach gold mine with strong project economics. KORE is exploring the project to further expand the oxide resource and test potential for high-grade sulphide targets at depth.

Long Valley gold development project covers 95 contiguous claims and an area of approximately 1,800 acres. The project was acquired from Vista Gold Corp. and was explored by Royal Gold in the 1980’s and 1990’s.

Long Valley has potential for expansion of the resource both laterally in oxides and at depth in sulphides.  The deposit has excellent oxide metallurgy (with historic testing averaging 79%). We anticipate the potential for low cost mining due to the low strip ratio and shallow nature of the oxide deposit.

It is located in Mono County, east-central California, approximately 57 miles to the south of the town of Bridgeport and about 45 miles north of the town of Bishop, California.  Both towns are connected by U.S. Highway 395, which passes a few miles west of the property.  Access to the property from the highway is via a series of graded gravel roads.  The claims are administered by the BLM on federally owned lands administered by the Inyo National Forest, U.S. Department of Agriculture. 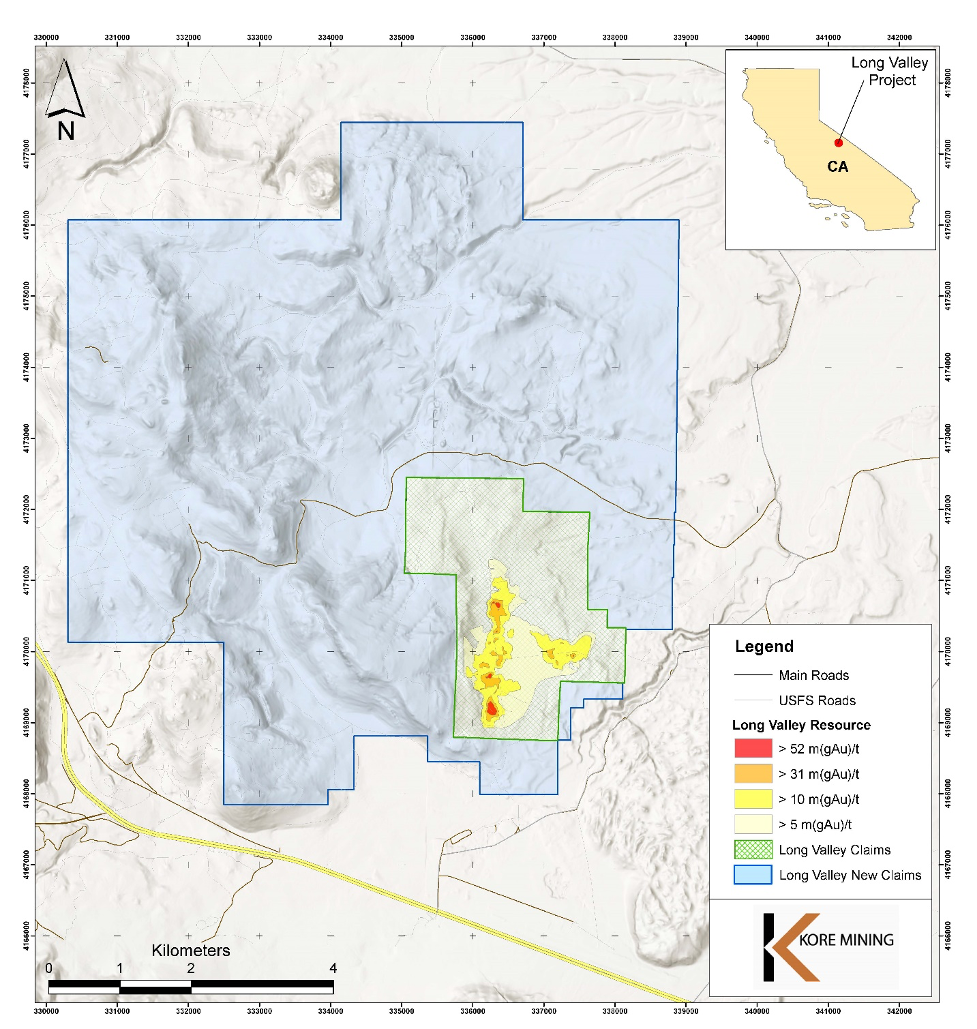 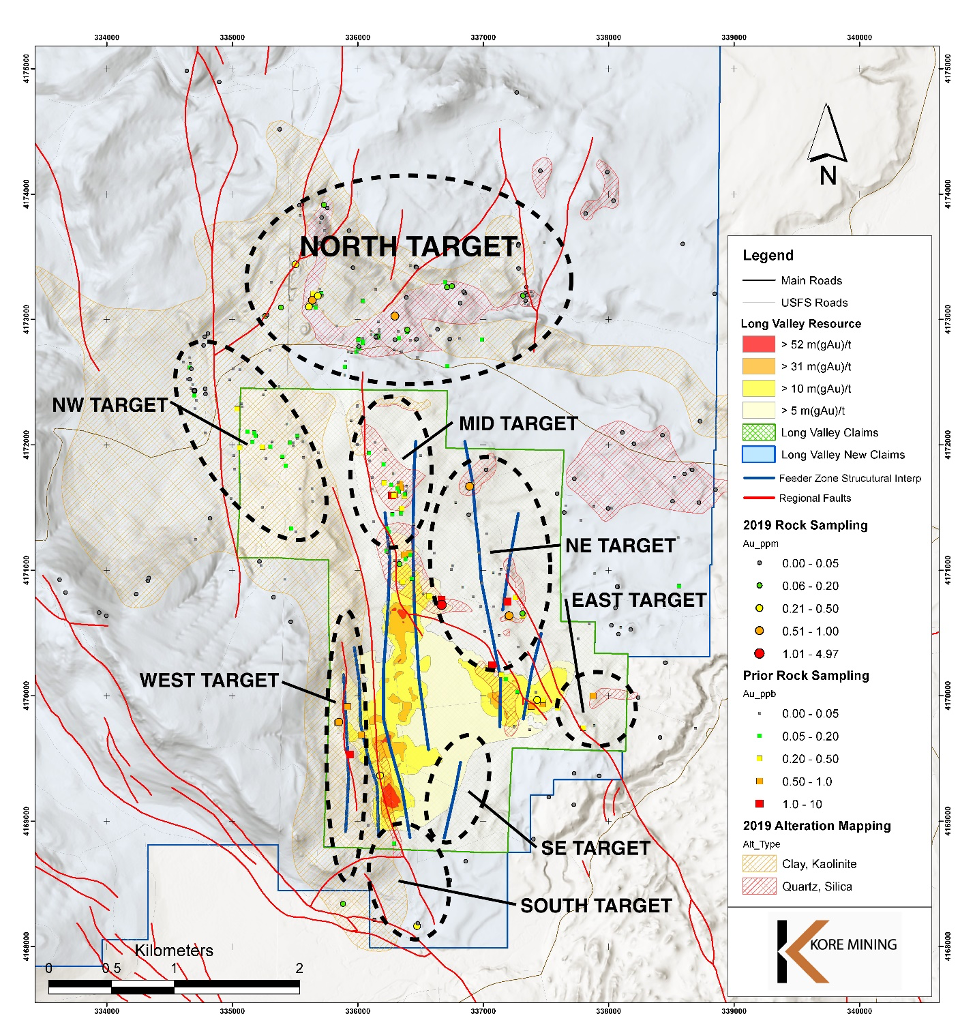 The project was explored by Freeport, Standard Industrial Metals, Battle Mountain Gold, and Royal Gold in the 1980s and 1990s.

1985:   Freeport dropped out of the option. Standard continued to drill and completed another 24 rotary holes on the South Zone.

1990-93:  Royal Gold and Battle Mountain formed a joint venture with Battle Mountain operating. Geological mapping, outcrop sampling and geophysical surveys completed.  59 RC holes were drilled.  The South Zone was expanded and the Hilton and Southeast Zones were discovered. Battle Mountain dropped out of the JV in 1993.

1994-1997:  Royal Gold completed 615 RC and 10 core holes on the Hilton Creek and Southeast Zones.  A metallurgical study and engineering studies are also completed.

1997:  Amax completed 46 RC and 10 core holes as part of a due diligence toward a possible JV.  Most of the holes twinned earlier holes.  Extensive re-assaying and check assaying was performed. Amax elected not to proceed with the JV due to a drop in gold price and a pending merger.

2000:  Royal Gold returned the property to Standard in order to become a pure royalty company.

2008: Vista Gold completes a Preliminary Economic Assessment for a heap leach gold mine**

Note:  Historic studies should not be relied upon by investors. Such studies were done prior to the implementation of the current NI 43-101 guidelines and information contained in any historical study is not being treated as current information 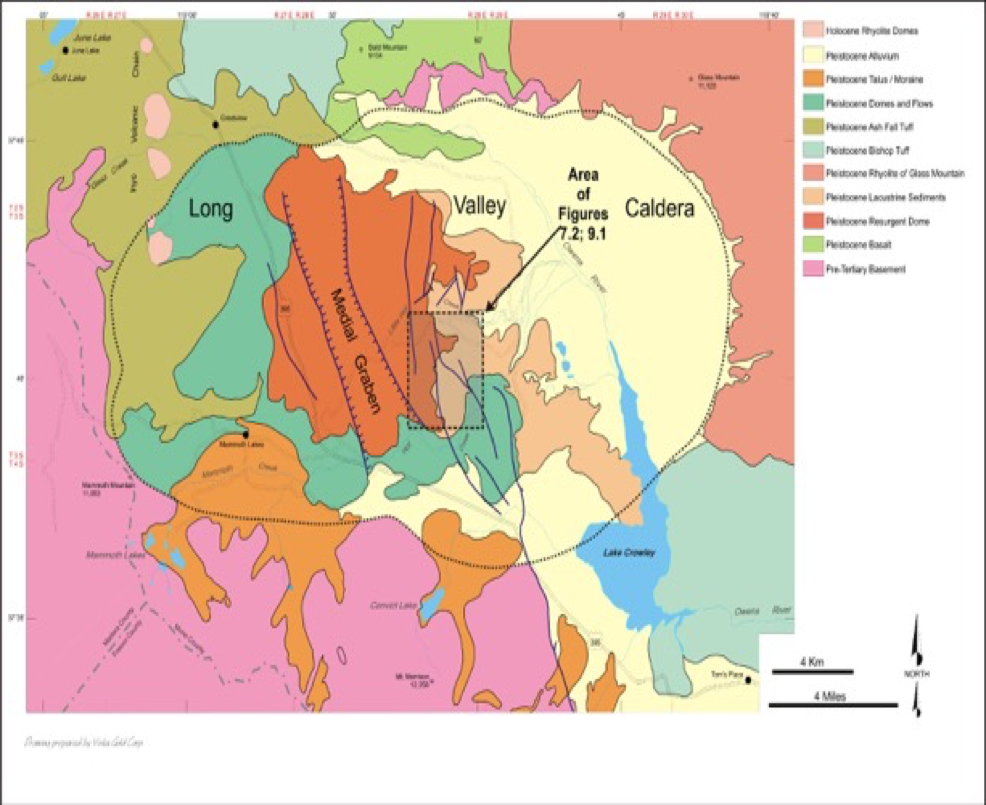 The Long Valley deposit is contained entirely within the early Pleistocene-age Long Valley caldera, which has been dated at about 760,000 years old.  The caldera is an elongated east-west oval depression measuring some 10 by 19 miles and is related to the eruption of the Bishop Tuff, which is mostly covered by younger rocks within the caldera.

The Long Valley gold deposit is located near the center of the caldera and is underlain by lithologic units related to the caldera formation and its subsequent resurgence.  Associated with the resurgent doming is a sequence of interbedded volcaniclastic sedimentary rocks which were deposited in a lacustrine setting within the caldera.  These rocks consist of sediment (siltstones through conglomerates) and debris-flow deposits, with local deposits of intercalated silica sinter and rhyolite flows and dikes.  All of these lithologies have been altered and/or mineralized to variable degrees.  Intruding the generally flat-lying lake sediments are several younger rhyolite domes that have been dated from 200,000 to 300,000 years in age.

The north-south trending Hilton Creek fault zone appears to define the eastern limit of the resurgent dome within the central part of the Long Valley caldera and extends outside the caldera to the south.  This fault system is thought to control the distribution of gold mineralization in the Long Valley deposit.  Offset along this fault appears to be variable and suggests that fault activity along this zone may be episodic in nature.  Active hot springs, earthquakes, and very recent volcanism suggest that the area is still geologically active.

Gold and silver mineralization at Long Valley appears to fall under the general classification of an epithermal, low sulfidation type deposit.  Several areas, termed the North, Middle, South, Southeast, and Hilton Creek zones, are mineralized with low grades of gold and silver; the North Zone lies outside of the current property boundary.  The mineralized zones are generally north-south trending, up to 8,000 ft in length with widths ranging from 500 ft to 1,500 ft.  The tabular bodies are generally flat-lying or have a shallow easterly dip.  Mineralization is typically from 50 to 200 ft thick and, in the South and Southeast zones, is exposed at (or very near) the surface.  The top of the Hilton Creek zone is generally covered by 20 to 50 ft of alluvium.  The vast majority of the mineralization discovered to date is located in the Hilton Creek zone.

Drilling is widely spaced in and between the North, Middle, and South zones, and it may be possible that, with additional drilling, these zones may be shown to be contiguous with the better defined zones to the south.

Royal Gold generally defined the base of the oxidized zone as the last occurrence of oxide mineralization.  Sulfide mineralization and mixed oxide-sulfide material also occurs above this boundary.  The sulfide/oxide boundary occurs at depths between 150 and 250 ft and is often coincident with or slightly above the current water table.

Long Valley is well drilled with a total of 896 holes, the majority being completed by reverse circulation with lesser core, rotary and air track from 1988-1996.  The mineral resource model is presented within the report title “Preliminary Economic Analysis NI 43-101 – Technical Report Long Valley Mono County, California USA” by Todd Harvey and Terre Lane of Global Resource Engineering and Neil Prenn and Steven Weiss of Mine Development Associates, effective September 21, 2020 and filed on October 27, 2020.”

The authors of the Technical Report, Neil Prenn, P.E. and Steven I. Weiss, C.P.G., of Mine Development Associates are each a “qualified person” as defined in NI 43-101 and independent of the Company.

The historic environmental impact report/statement (EIR/EIS), concluded that there were no significant environmental issues that could not be mitigated.   With strict laws in California on air, water and site reclamation the Imperial project will be operated to the highest standards in the world.

KORE has the advantage of extensive historic work supporting the historic feasibility and EIR/EIS. Kore is in process of updating technical, environmental, biological and cultural studies to exceed California mining regulation and practices.

In April 2017, the Trump administration developed a “priority work” list for the BLM to streamline the permitting process for hard rock mining (and other activities).

In an August 31, 2017 secretarial order, the DOI “streamlined” agencies’ processes for analyzing environmental impacts. Now, agencies may not spend greater than one (1) year to complete an EIS, nor may their final report be more than 150 pages, or 300 pages for “unusually complex” projects. 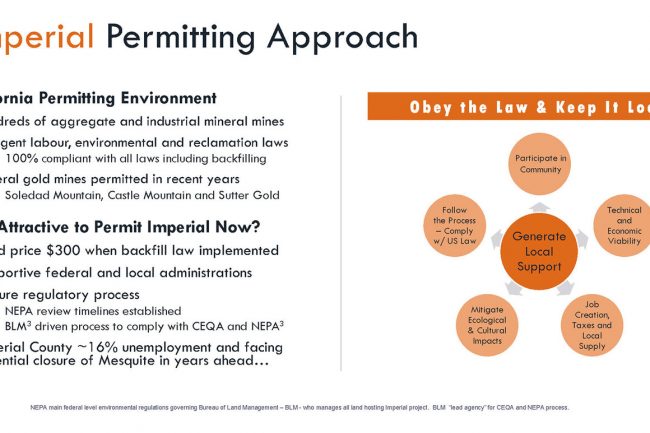